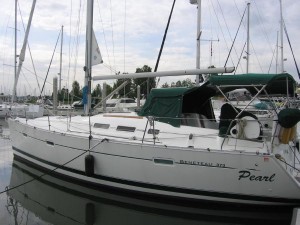 This was the day I met Pearl for the first time. It was bright and sunny. A perfect day to be outside. My cousin Chris, his wife Julian, and two kids were visiting from LA for a week. I’d hurt my back and was hobbling around.  I had to find something to do, preferably outside, that wasn’t too active, but that would keeps his two boys engaged. My friend Andrew had been asking me to join him to a boat show somewhere on the river. I figured what the heck. Give it a shot. The kids should love it.

The previous week, Chris and I had been chatting about what we wanted to do with our lives. We’d been discussing our bucket lists. I was recently divorced — an aggravating long drawn out affair — and wanted to have some fun. Chris had recently had a mild heart attack. The thing that kept coming up was sailing. I’d always wanted to do go cruising, and I had lusted after a Beneteau First 38 ever since I had chartered one from the Moorings in the mid 90s.

When we got to the show, which was actually an open house at Passion Yachts there were a bunch of boats for sale — and lo and behold a Beneteau that looked like she was about 38 feet. I was shocked. I had to take a look. My dream boat?!? For sale in Portland?!? Really!!!

I hobbled down to look at the boat. Yup. She was a Beneteau 373 named “Break ‘N’ Wind.” Pretty boat. I hopped on board to check her out. While she was more or less what I was looking for, the price seemed a bit steep, and the layout was nice, but she just wasn’t quite it. Slightly disappointed I exited, chattering with Chris about what I liked, disliked, etc. While I was conceptually interested I wasn’t ready to buy. Whatever.

Chatting in the cockpit, I happened to glance over to the left. There was *another* Beneteau 373. She looked slightly older. Her canvas was hunter green and slightly faded. Eh. Worth a look. We were there. Why not?

I was pretty much sold the moment I boarded Pearl. She was everything I wanted, starting with the name. She had the walk through transom and the swing away wheel that I wanted. She had a roller furling main and jib. Nice! And then down below … I discovered exactly the two cabin layout that I was hoping for.

Since boats are female, if one were to anthropomorphize Pearl, she’s not the kind of woman who wears red. For me, she’s simple, classic, classy, doesn’t scream for attention, but is there, is well put together and just does the right things quietly and capably.  You are lucky if you notice her. This was a serious surprise. Exactly what I wanted. Exactly where I lived. Who would have thought?

Following are pictures of Pearl’s interior from the advertising brochure from Passion yachts.