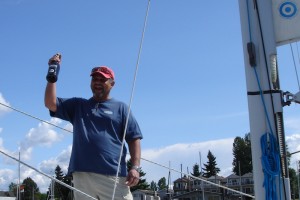 Pearl’s maiden voyage under my command. What the heck I had done? Why on earth would a sane (in my opinion, but other opinions vary) person buy an expensive cruising boat that would fit best in the Caribbean and then park it on a river, and how the heck would the evolving dream of sailing her in the Caribbean materialize. And then there was the issue of sailing her. I was pretty rusty, the Columbia river was at a near record high, about 20 ft over low water, there was a strong current, and a my first time out would be with very inexperienced (but capable) crew. Not my smartest move, perhaps.

My niece Shari and best buddy Jaywant had come up from the SF Bay Area to support me on this most auspicious occasion. Cita, Brandee, and Vida (Brandee’s daughter) were joining as well. I was still very unfamiliar with the boat. I had just two test sails under my belt with her. But a boat’s a boat, and I figured I had enough experience with boats and it would be easy enough to manage provided nobody fell over board. Yeah.

The day was perfect, a bright sunny Portland day. The previous couple of days had been rainy and gloomy. But the day was bright crisp, and relatively warm. We had coolers packed with food and beverages — Jaywant can always be counted on to handle that. We were committed.

The “sailing” started off by with the obligatory toast to Pearl, the local water deities, and our good fortune to be able to get out on the river on such a pretty boat, on such a pretty day,  and with such great company. Leaving the dock was a cinch. Fire up the engines, cast off the lines, turn the wheel to starboard, let Pearl drift away from the dock — that was it.

From there, it was a piece of cake. The river was so high running aground wasn’t an issue. Pearl just did her thing. There wasn’t much to the sailing. Pearl’s roller furling made raising and furling the sails a non-event. Since Shari, Cita, and I had been sailing together before, it was easy to rely on them to handle the sails under my instruction. We made a couple of runs up and down the river. Easy-peasey.

Our plan once back at the dock was to have a celebratory dinner on board. Jaywant was looking forward to this. Being unfamiliar with the boat, we couldn’t figure out how to get the microwave going — there is a second breaker panel that found later that switches on the plugs — to warm up the food. Further, the boat was missing stuff like paper towels, napkins, etc., and not wanting to break anything I really didn’t want to fiddle around too much. So we ended up packing everything up and headed back to my house for dinner and a relaxing evening.