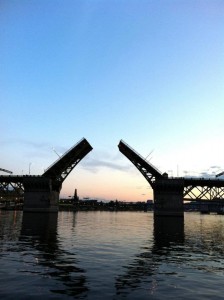 There is a lot that I love about living in Portland. The rivers (Columbia and Wilamette) are two of them. I’d always wanted to get on the Willamette and do a quick tour of the city front. It makes me thinking of cruising the sea wall /water front in San Francisco.

Anyway, my friend Jaywant was up for the weekend and surprisingly, the thing he wanted to do most was go out on the boat. Quite frankly I was shocked — Jaywant’s not one for sailing, and particularly not when it might be chilly. But since he was visiting and I desperately wanted to go up the Willamette before the end of the year, we took off.

The Willamette River bisects portland, It’s the dividing line between the East and West Sides of the city. While this adds to the cities charm, it presents a bit of a challenge for sailboats as you have to make sure that you can pass under the bridges — or have them opened for you.

Information regarding the bridges follows along with a photo gallery. As you can see, cruising up the river was fun!