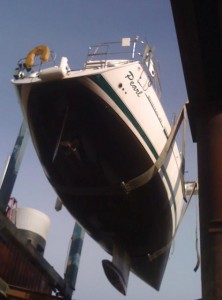 Pearl was pulled out of the water to be prepped for shipping to her new temporary venue in Texas. In retrospect, this may not have been a good idea given the date, but, …. Firstly, there was the issue of stripping her bare. Surprisingly, this was a bit more unsettling than I had expected.

I’d taken Pearl’s sails down and taken them over to Kerry Poe at the North Sails Loft after sailing on Jan 01 with Denise and her boyfriend Dana. This felt a bit like clipping her wings. She’s a sailboat, after all. The sails were back on board, but the rest of the canvas and super structure (bimini, dodger, etc.,) needed to come down. The boom had to be removed, all of the lines and blocks removed, … everything needed to come off, aargh!!! My friends Ryan and Jesse a neighbor at the marina off Wind River helped out. This was the first level of “disrobing.”

Early Friday morning, Pearl was poled over to the Marine Lift at Danish Marine, just around the corner from where she was customarily berthed. From having her wings clipped, this was about to be major surgery — removing her mast and parking her on the hard to get her prepped for shipping.

Getting the mast pulled and the boat lifted out was more entertaining than I had expected. The mast, which is quite heavy, ended up being dropped. More accurately, it wasn’t quite balanced when it was pulled, and it flipped over and hit the back of the boat, much to the horror of the ship wrights and lift operator. They were very apologetic, never having managed to do this before. The damage was very minor — I lost the masthead fly, the wind instruments, and the wheel cover got ripped. Most importantly, nobody got hurt, and Pearl didn’t suffer any serious damage — and Danish marine took care of getting everything back to normal.

Following are a bunch of pictures of the entire process.