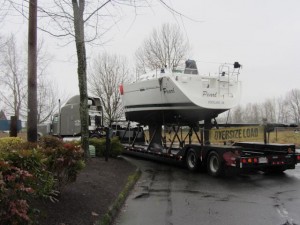 Loading day. Rainy. Freezing. Miserable. Pearl gets loaded to head off to the gulf. Throughout the morning, the theme song from “Smokey and the Bandit” was running through my head. My friends Cita, and Toni from Wind River,  came out to watch Pearl get loaded and to wish her “Bon Voyage!” In my rush to leave the house, I neglected wear rain gear, so I got thoroughly soaked. It was miserable, and I had mild separation anxiety. Pearl was about to be dragged, out of her her element down filthy, icy, salty, roads. Ugh!

The driver who showed up to transport Pearl really didn’t inspire me with confidence initially. He was pissed off, rude, and was railing about the week delay that he had been subject to before he could haul “this piece of shit boat” and get back home to Texas. While I sympathize with him re the delay, his attitude seemed a bit over the top.

Loading Pearl  was preceded by a week of getting the bottom painted, taking down almost everything except the stern pulpit; cling wrapping all of the exposed stuff like the winches, traveller, etc.; sealing off any holes through which moisture could get in; and stabilizing all fo the stuff that had to be packed in side so that it wouldn’t get messed up; making sure that stuff stored on the boat wouldn’t get damaged in transit. Quite a chore. Fortunately, I had a bunch of help in doing this from Denise — who is now consdiering coming down to Texas to help me unpack and then go sailing for a while —  and my friend Emily.

There were other odds and ends that came up. One of the through hulls had a damaged collar. That got changed out while the hull was dry. The batteries which had reached the end of their useful life got replaced. This is little stuff that’s important later.

The Jerry and his team at Danish Marine were super helpful and supportive with all of the random odds and ends that needed to be done. Particularly with the final details when the boat was on the truck and she was sitting higher than the required clearance of 14 feet. A helpful boatyard is a marvelous thing. I leaned a bunch from being around the shipwrights there.