Denise (support for the Caribbean tour) and I finally left Portland on at 6:00am on March 19. Despite having stayed in Portland for an extra evening so that I could rest a bit, I ended up puttering around the house — the upstairs mostly as I had “handed the house over” to Ron who is renting the place for 6 months while I figure out my sailing plans — until about 1:00am. When Denise called at 5:00 am to say she was coming over, I was not as rested as I wanted to be. Whatever. We needed to leave. We needed to get to Houston and get the boat set up. We hit the road.

The drive down to the Bay Area wasn’t bad. I took the first shift down to about Corvallis. When I faded out, Denise took over. I slept through most of Oregon. We traded off back and forth after that until we got close to the Bay Area, when I took over for the last bit.

While my friends in the Bay Area come to visit me at some central location while I am down there, this time I went to visit a couple of them. The first was Nira in Mill Valley. Nira’s a friend from Portland who moved back home to the Bay Area and was happily back home a couple of streets from where she grew up. While I’d been back to the Bay Area several times since she moved back, I’d never made the time to visit her in her own home. So off to Mill Valley it was. Since it was around 4:00pm on a Monday, Nira vectored us from I-80 through Vallejo, and into Marin. This was a great way to get into the Bay Area as we ended up going against rush hour traffic. 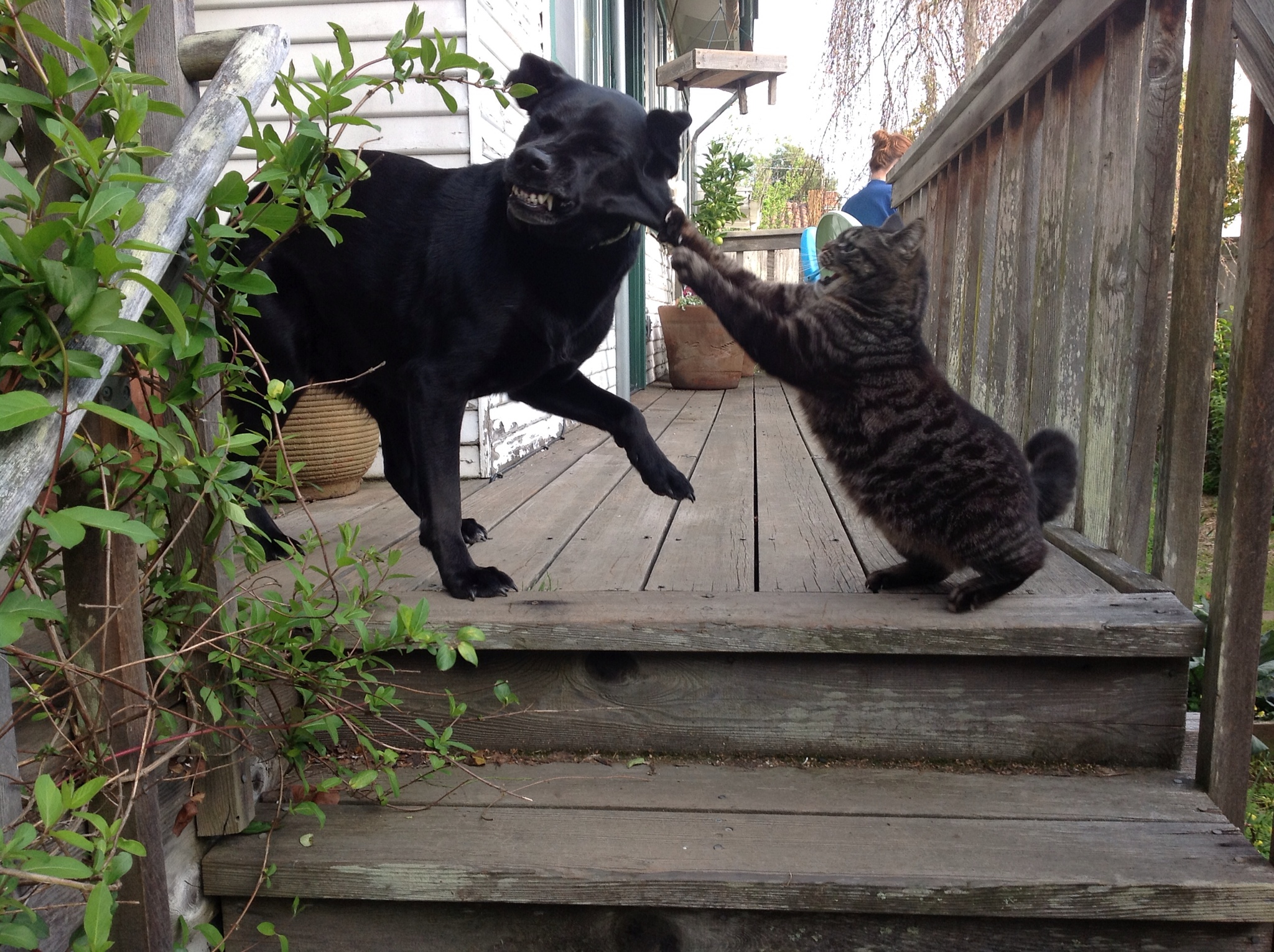 Nira’s new digs were a cute little cottage, replete with Sauna, plunge pool, and raised vege beds. Add chickens and/or a couple of Pygoras (pygmy angoras) and you could have been in Portland, but with warmer weather. It was also nice to see Max, Nira’s black labX who is Harley’s best buddy/cousin, and to visit with Nira’s mom — Nira. I’ve attached a pic of Max getting spanked by Suzie the short tailed and apparently ill temperd cat.

From there it was off to San Carlos via the Golden Gate Bridge where Denise and I were staying at Hotel Sahai — also known as the home of my friends Faye and Avanish. That plan, however, was altered by my friend Joe (remember Uncle Joe) from the radio installation?) to collect more radio gear for Pearl. Joe had bought a self contained APRS transmitter that he thought I should have on Pearl so that I could be tracked whenever I was close to land. So, after a mandatory brief stop at the Golden Gate Bridge, it was off to Joe’s after a brief stop at 3 Amigos in San Mateo to grab a couple of burritos before heading off to Joe’s in Milpitas for radios and how to install them.

Needless to say, it was pretty late by the time we got to Faye and Avanish’s — a long but good day. This is the first step in a completely undetermined journey.