Key West, here we come! We were finally getting out into open water. Doing another ditch run to get us out of Sarasota was ok, however, I was dreaming of fair winds and open water. Getting out of the short narrow channel connecting Venice to the Gulf was like stepping from a bathtub in a washing machine on the wash cycle.

Cita, who is susceptible to motion sickness took about 5 mins of the wash cycle to turn green. Despite my attempts to get her to steer, look out into the distance, and otherwise do stuff, she averred and headed below. Big mistake, but sometime you just have to do what you feel like you have to do.

Once we got far enough from land, we unfurled the sails and headed south. This steadied the boat some, but we really didn’t make much headway as the winds were really light and from the south-south-east.

The further we got from land, the worse Cita felt got. Pearl’s pitching and roilling reall got to her. Hunkered down in the cockpit, poor Cita got the burps. Urrrrrrp! one-one-thousand-two-one-thousand … Urrrrrp! It seemed like she was burping every 15 – 30 secs on cue, like the mating call of a particularly persistent sea bird. Denise and I couldn’t figure out how and from where Cita generating so much gas.

After a while of getting nowhere slowly, we figured we’d furl the sails and motor towards Boca Grande, the entry point to Cabbage Key. As we approached the pass, we noticed a large fleet of sport fishing boats hanging around just off the main channel. The were casting vigorously for some large brownish fish or the other that seemed to come to the surface and do a little roll. At first I thought they were sharks hitting bait fish at the surface, but that wasn’t quite it. I was puzzled. And then it hit me. They were fishing for Tarpon — large, bony, spirited fish that need to breathe in air periodically.

[Curiously, the record for a Tarpon is something around 50 lbs, caught in Sri Lanka.] 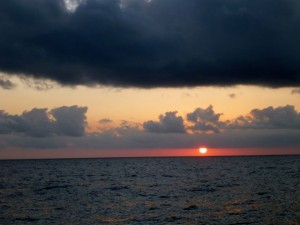 As we got inside of Boca Grande and headed south, we noticed a pretty bay off to the south east — Pelican Bay. It had a few sailboats at anchor and it looked idyllic. Further, it would get the boat stopped and let poor Cita recover a bit. It wasn’t to be. Pelican Bay is only for shoal draft boats ( ~ 4ft draft) and Pearl does not qualify. Needless to say, we ran aground in the soft mud.

At this point, I really didn’t want to mess around any more. I wanted to make Cabbage Key before dark and get the anchor set for the night, so we motored down the ICW once more and did just that.