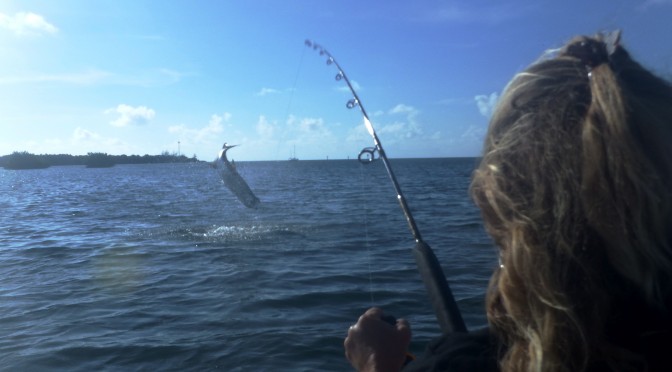 Last Sunday Lisa and I went fishing with Reuben, a friend of ours who is a local fishing guide and Captain. I’d been quizzing Reuben for a while about fishing spots around Key West and techniques for catching the various species around here so he decided to take us out on his flats boat to show us how it was done.

The morning started out with fishing for Tarpon just off the marina where we are based. Tarpon, are super-fun-to-catch game fish that live around the Florida keys. They are pretty easy to spot as they roll at the surface, particularly when they are feeding. They are notoriously acrobatic like sail fish and marlin, and put up a really good fight. Large Tarpon can get up to 8 ft long and 350 lbs. They really are pretty spectacular.

While Lisa and I had hooked Tarpon previously, neither of us had “landed” one. Landing Tarpon entails bringing the fish into the boat and grabbing the leader. You aren’t allowed to actually take them out of the water as they are a protected species. 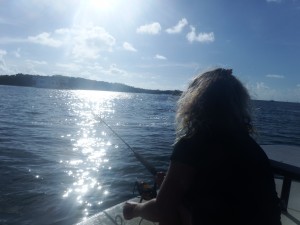 Anyway, after loading up the boat for a mornings fishing and collecting the bait fish we had in our trap, (see story about the eel) we set the boat up so that it would drift in the current through where the tarpon were feeding. We baited our hooks by hooking some of the  live pin fish we had collected through the upper lip, and cast them out. The point of hooking the fish through the upper lip is so that they can open their mouths, letting water through their gills and last longer.

We didn’t hook anything on either our first or second drifts. On our third drift, I thought I had a strike but really managed to foul-hook something on the bottom. Usually, if someone has a fish on, everyone else brings their lines in, which Lisa and Reuben did.

This time, once I cleared my line  Reuben cast out and immediately got a strike. Realizing that Lisa had never LANDED a Tarpon, he passed his rod over to her so that she could fight the fish. Being a guide, getting a Tarpon online was no big deal for Reuben. Amusingly Lisa thought he was just handing her a rod to hold before she noticed a the reel whining as the fish ran with the line and grabbed on. 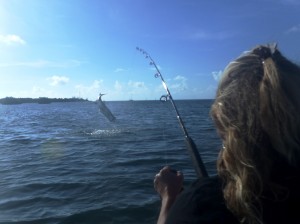 And then, the fight was on. The Tarpon Lisa had was pretty large. When they run, the run pretty hard. They also breach, jumping out of the water trying to break the line or shake it loose. As I’ve heard it, most fish are either marathoners (like tuna) that keep running, and running, and running, or sprinters (like Barracuda)  that strip your line and jump a bit and are done. Tarpon do both — it’s one of their features as they have a swim bladder through which they absorb oxygen, giving them tremendous stamina.  Lisa’s Tarpon kept running and rolling, flashing his colors in the clear Florida water. He also breached thrice, and I manged to snap a pic of him on one of his jumps.

It took about 30 mins for her to reel the Tarpon in. When she got it to the boat, Reuben grabbed the leader, making the “landing” official. His guess at the weight was 50-60 lbs. Good job Lisa! 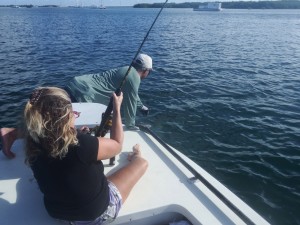 When Reuben tried to lift the Tarpon so that I could get a picture, the fish pulled gain, snapping the leader. While Tarpon don’t have large sharp teeth like sharks and barracuda, the have very rough lips that wear through line and leaders.

After that we did another drift but that was pretty much the end of the Tarpon’s breakfast time so we packed up and headed off into “the Back Country” for some flats fishing. 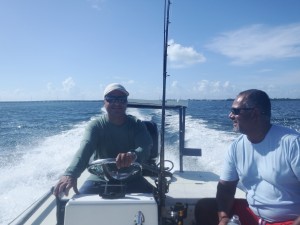 The back country of Key West is a series of uninhabited keys to the North (mostly) of Key West. The waters around them are pretty shallow, probably a couple of feet on average, hence the term “flats.” There are several different species of fish that inhabit the flats hunting around for various critters that live there. We headed out there looking for shark, red fish, and maybe some snapper. The picture below is from a different trip.

Our first stop there was around Snipes Key. The water there was pretty cloudy and tannic from fermenting (dead) sea grass. Apparently, this is something that Redfish (Red Drum) like so we decided to try our luck. The water there is too shallow to use an outboard, so Reuben graciously poled us around, standing on the platform you see behind him trying to spot fish at which to cast top water lures (poppers). I half expected Reuben to break into song while poling,  but he didn’t oblige on that one.

We didn’t have much luck until we got into a deeper channel where I managed to hook a small Black Tip shark. He was maybe 3 ft long and weighed about 20 lbs? 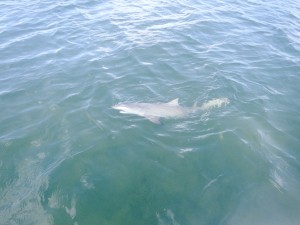 After the shark, we decided to head back with a brief stop in one of the channels for some snapper action. This was a completely different style of fishing than what we had been doing before. This time, instead of using plugs or lures, we chummed the water and used squid on weighted lines, bottom fishing, sort of.

We caught a whole bunch of fish here, snappers and blue runners. Reuben managed to catch the smallest fish of the day, but then he really wasn’t trying to catch anything. He was very kindly showing us how and where to fish. 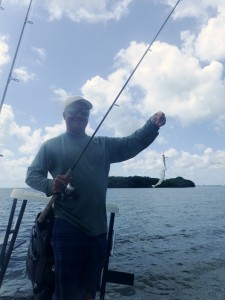 After that, we headed back in. The entire trip lasted about four hours, and it was a lot of fun. There was a lot of laughing. As far as guides go, if you ever need one Reuben’s a great guy to get. He has a quiet sense of humor and doesn’t take himself very seriously unlike many of the other guides in Key West. He is, however, a great teacher. Both Lisa and I learned a lot from him.

If you are wondering whether this was all sport, just catch and release, it wasn’t. We kept several of the snapper that we caught. There is nothing quite like fresh unrefrigerated fish that you’ve caught — for dinner. Here’s Lisa’s soon to be world famous Snapper Veracruz. 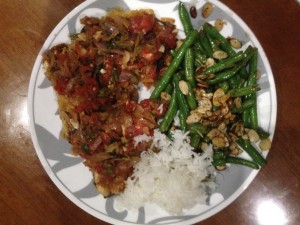 One thought on “Tarpon and Flats fishing with Reuben”