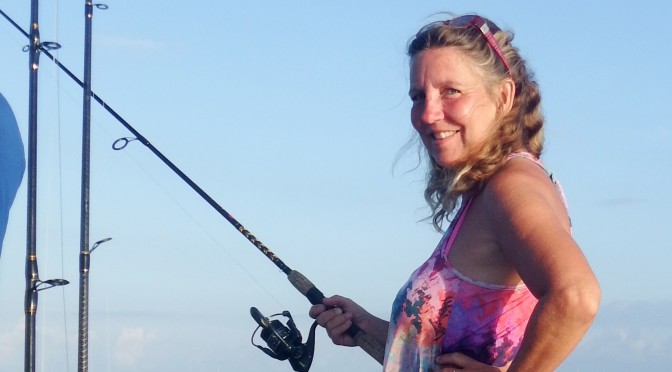 We went fishing once again with our friend Capt. Ruben Dias a couple of weeks ago. While we’ve been honing our fishing skills by going out every day, it’s a bit difficult to get to the places there are interesting sized fish in our Dinghy. This has prompted us to consider getting a little fishing boat that we can take out and even possibly do fishing charters, but that’s another story. Back to fishing with Ruben.

The fishing goal for the day was pretty interesting. There were still Tarpon rolling in the channel in front of our marina. Lisa and I had also noticed some Permit (Trachinotus falcatus) “tailing” around the same channel. Our plan for the day, therefore, was to try to catch Tarpon and Permit.

Permit are pretty interesting fish. They are broad and flat and look a bit like Jacks.  They are also shy and pretty skittish, which makes them hard to catch.  Permit feed on crabs, shrimp, and other stuff that you find on he bottom around mud flats. When they do so, they feed head down, with their tails stuck in the air — hence the term tailing — generally facing up-current. To catch them, ideally you present them with a live crab floated down to them with the current.

Fortunately for us, Ruben had been out the day before and had a couple of live crabs saved. We did, however, have a couple of different types of fake crabs as well.  While crabs will work for Tarpon as well, what we really needed fro them were Pin Fish (aka Sand Perch).

Previously, Lisa and I had set out Pin Fish traps. These are mesh boxes that you bait with chum (ground up fish waste). They have  with a couple of entrances through which the Pin Fish enter and then … it’s Hotel California. Anyway, this time, instead of setting out a trap, we had to catch our Pin Fish as we had lost two traps over the previous couple of days. 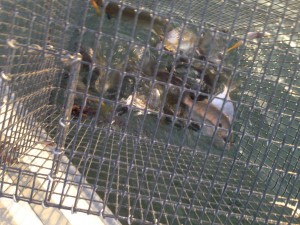 Juvenile Pin Fish hang around grassy flats, so out first order of business was to head to one and catch a bunch. To do this, we used what’s called a Sabiki rig, essentially a bunch of tiny hooks attached to dropper lines that are baited with slivers of squid, and chummed up a bunch of Pin Fish. Catching the pinfish was surprisingly easy. The Sabiki rigs allow you to pull in several at the same time. Since it was the crack of dawn and my coffee hadn’t kicked in, Lisa and Ruben did the honors. 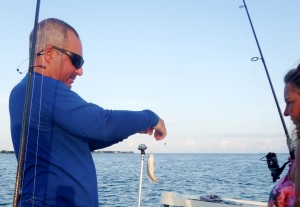 After we’d got a decent stock of Pin Fish we headed back in the direction of the Marina and what we hoped was Tarpon having their breakfast.

When we got to the channel, there were a couple of Tarpon rolling every so often. That meant they were feeding, but there were only a couple of them instead of the decent number we’d seen the previous time we were out. I wanted to head in, gas up the boat, and go chase Permit. Ruben, however, wanted to try his luck.

The tide was still coming in. We decided to set up and drift in with the current along the path that the Tarpon would be feeding. On the first try, we got pushed to leeward by the wind faster than we expected. On the second try, Ruben adjusted for the wind and we drifted down nicely along the channel. We all cast out. I was on the bow of the boat  and cast downwind. Lisa was in the middle and cast out in the same direction. Ruben cast upwind. Just about the time we got to the leeward side fo the channel, Ruben got a strike and hooked up.

This time, when Ruben tried to hand over his rod, both Lisa and I declined. It was a good thing we did because Ruben had hooked an 80-90 lb fish. The fight was on! The Tarpon stripped Ruben’s line. As it tired, it came close to surface, it jumped. Ruben reeled in. As the fish got close to the boat it stripped his line again. While we got the fish close to the boat on several occasions, we didn’t get a chance to grab the leader and call the fish “landed.” Finally, after about an hour, the Tarpon manage to break the leader and was free.

While the broken leader was unfortunate, it wasn’t really surprising. Ruben was using a 50 lb fluorocarbon (monofilament) leader that pretty much disappears in the water. While Tarpon don’t have sharp teeth that will slice a plastic leader like Sharks or Barracuda, they have a hard mouth with very abrasive lips. Eventually, their lips wear through the leader — if they don’t spit the hook out when the jump.  I think even though Ruben was disappointed, he was also a bit relieved. The fish worked him pretty well. The next day, he had bruises on his fore arms from fighting it.

Unfortunately, I have to take a some of the credit for Ruben’s lost fish. Fishing for Tarpon on light tackle is not just about the guy on the rod landing the fish. The person driving the boat plays a part by herding the fish in helpful directions, letting the fish run and tire itself without stripping all the line, and bringing in close when necessary. There’s a magic balance here. Ruben did a great job with this when Lisa had a Tarpon on line previously — myself, not so much.

After the Tarpon, we headed into the marina to gas up the boat and head out to the flats to the South of the Marina looking for Permit and perhaps Redfish (Red Drum). Flats fishing is different. Essentially, you’re fishing in a couple of feet of water. The fish you’re hunting are “bottom feeders,” that are typically foraging for small fish,  crabs, and shrimp that live around the sea grass and outcroppings. This style of fishing involves spotting the fish and then casting at them with an appropriate bait. The fish are pretty skittish, so ideally, you cast ahead of the fish and drift your bait towards it. This is not a sport for the impatient.

Fortunately, Ruben has a “flats boat” that’s designed to run in shallow water. Typically, a flats boat will run in less than a foot of water, with most of them needing about 8 inches to float. Running in very shallow water is a problem with a regular outboard because the prop wash churns up sand and silt that can get drawn into the engine. Therefore, when on the flats, these boats are poled by the guide who stands on an elevated platform on the stern — or an electric trolling motor. The platform serves three functions. The first is that it offers an elevated view from when to spot fish. The second is that it allows a longer pole to be used for poling, and third it’s a handy cutting table for prepping bait. The downside to a flats boat is that it becomes really bouncy if there is any chop — it doesn’t have enough of a ‘V’ in the hull to cut through waves. 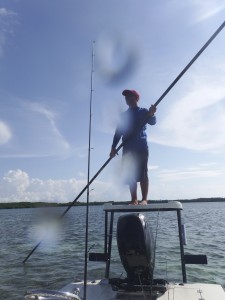 I was convinced that the flats onto which we were headed were full of Permit and Redfish, and Ruben dutifully obliged by poling Lisa and myself across it trying to find fish. We were sadly disappointed. There were no Permit or Redfish to be seen. All we saw were a couple of Spotted Eagle Rays cruising along.

Having given up on the flats, we decided to head North to a popular fishing location: the Blue Fish Channel. Lisa at this point was eager to catch something that she could sink her teeth into at dinner. So off we went fishing for the ubiquitous Snapper.

The Bluefish Channel lies to the North of Key West and more or less parallels the  Calda Channel which is a secondary entrance into the Key West harbor. It’s interesting because it drains the grat bank to the north of Key West.  What this means is it’s a majot “highway” for fish that come onto the bank (flats) to hunt. The tricky bit with the Blue Fish Channel is that the Southern end it’s only a couple of feet deep. Ruben who’s pretty familiar with fishing it had no problem getting us in.

I love this area of the flats. It’s a quick ride from Key West, but makes you feel like you are lot further out than you really are. It’s also picturesque, you have water in various shades of blue punctuated by little green islands. Anyway, we headed up Blue Fish Channel, dropped anchor and started chumming. 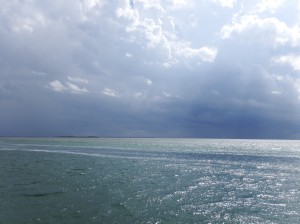 It didn’t take long for Lisa to start hooking snapper and Blue Runners. She was hoping for some large Mutton Snapper, but all we got were Mangrove Snappers and Grunts. Having gotten bored with what we were catching, I decided to use a Shark Rig  (wire + fluorocarbon leader) with a small Grunt to see what I could catch. Unfortunately for me, having got a decent strike and a short run, my line broke. As Ruben Determined later, my line (mono-filament in this case) had got dried and/or worn out by the tropical sun.

This was fun mixed bag fishing. You get what you get. Our fun, however, was cut short by a thunder storm that closed in from the North prompting us to head back to the harbor and the safety and warmth of Pearl. 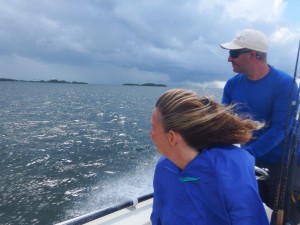 One thought on “Fishing the Flats and Blue Fish Channel”