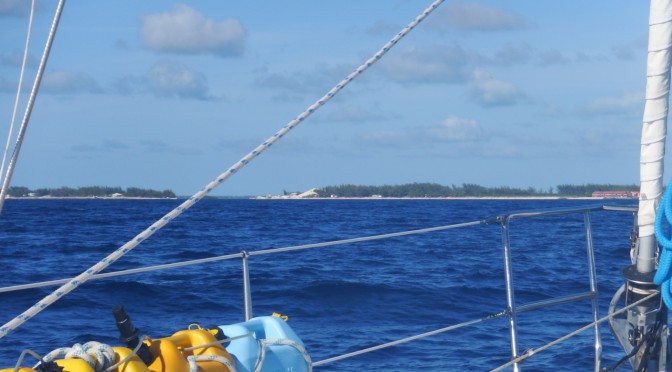 There are is a bunch of lead-up to this post that I haven’t got out yet. The bottom line is that Lisa and I have broken out of Key West, and are now in Bimini.

We made our crossing on the 20th. The weather couldn’t have been better. We left our anchorage at Rodriguez Key off Key Largo at 7:00am and were in Bimini and cleared though customs and immigration by 6:15pm.

I’d done a bunch of reading, blah, blah, but when it came down to it, we took slightly higher predicted winds out of the SE and did well for it. I had completely psyched my self out for this crossing and was on edge. Lisa was totally excited that we were finally doing something we’d talked about for a long time. What was nice was once we got in the stream, it wasn’t a big deal — it added between two to three knots to our boat speed. The increase is more significant if you look at it as a percentage:  about 30% – 50%. I calmed down and had a nap while Lisa kept watch.

When we left Rodriguez key, we headed pretty much due south to the Molasses Reef Light. We kept it to the East of us to stay in clear water — per our friend Bill’s recommendation. About 0.5 mi out from the reef, we raised the sails in 13 – 16 kts of wind, set a heading of 80 magnetic (71 True) trimmed the sails for a close reach (60 deg. off the wind) and kicked back. We decided to motor sail as I wanted to get to Bimini as soon as possible. With the engines turning 1200 rpm and the sails up, we averaged 7.5 kts for the first quarter of the crossing. The wind picked up to 20-25 during the middle of the crossing and we averaged 9 kts. The wind stayed with us until we were about 15 mi off Bimini, when it dropped to 10 -12 kts. The swells we pretty consistantly out of the south at about 1 – 2 feet almost all the way acrossg. They got up to around 3 ft beginning 7 mi off Bimini.

The entrance to Bimini was a bit challenging for me. The entry is marked by a couple of sets of buoys. That’s it. There are several people who’d told me that once you made the turn into the harbor, we’d be running about 100 ft off the beach. I thought that was probably an exaggeration, but it wasn’t.  The channel is pretty narrow and very close to the beach. It’s also very shallow at the entrance. Pearl touched bottom once on the way in. We also ran aground en route to our slip at Bimini Blue Water but got off without a problem.

What we did well was cross the gulf stream comfortably and safely. When we do this again, i would, however, leave earlier — at about 4:00am rather than 7:00am. The reason we didn’t do this is because I wanted to see the stream in the light. Pulling off the crossing was a big deal for me. It validated that a lot of what I thought and had learned was correct — an exam, kind of. Behind our “pass,” however, there is a large group of people who have coached, cajoled, counseled, and conspired, with us to make the adventure we are on a reality. Most of them are breathing easier now that Lisa and I are no longer in Key West.

At present, Pearl is safely tied up to a dock at Bimini Blue Water. We had a great day touring Bimini. More on our impressions of Bimini soon.

8 thoughts on “Crossing to Bimini: We (finally) did it”