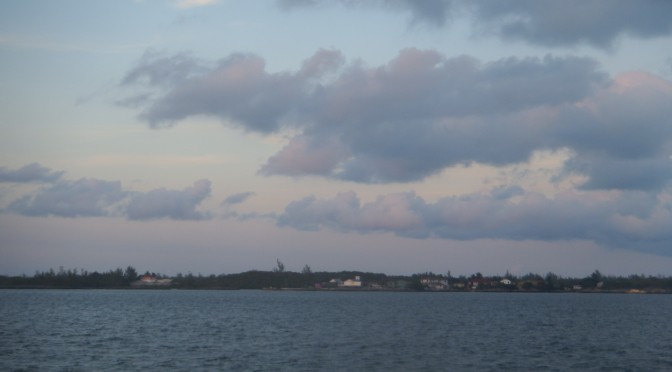 This entry is part 2 of 10 in the series The Abacos, Bahamas

The trip from Mackey Shoals to Bullocks Harbor was pretty uneventful. We (read Lisa) caught a couple of decent sized barracuda as well as a small amberjack along the way. We also ran into a Bahamian fishing trawler trailing a line of smaller fishing boats. The fishing boats kept changing position. We weren’t sure whether they were fishing the by-catch that the trawler was tossing out or what they were doing.

The entry to Bullocks harbor was interesting. We arrived on a falling tide. The depths coming into the harbor were shallower than the charted depths. While we didn’t touch bottom, we came pretty darn close.

Bullocks harbor is a small settlement of a few hundred people at best. There isn’t a whole heck of a lot going on there that we could tell. They did,  however, a  have a nice marina at Great Harbour Cay that looked like a decent hurricane hole. We thought about taking Pearl in there bu decided against it. We did take the dinghy in. The harbor entrance is through a narrow cut that would be challenging with any kind of seas running.

Bullocks Harbor itself consists of a couple of roads. It’a basically a village in the middle of nowhere. We ended up spending two nights there. The should be good fishing on the flats to the east.

Pictures from Bullocks Harbor below.