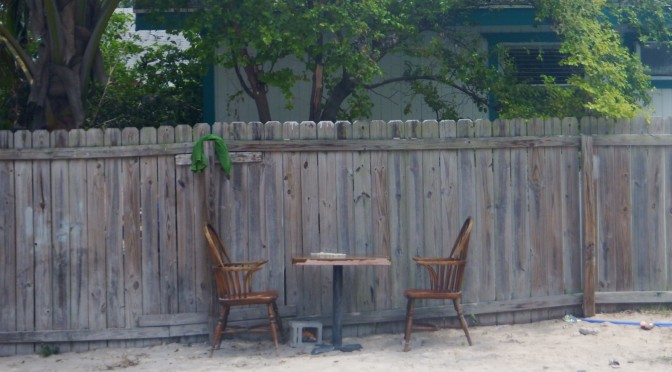 Bimini was nothing that I expected. When we arrived I was expecting to find Miami East, condos, mega yachts, cottages in tropical colors, clubs with steel bands, and thumping music.

North Bimini couldn’t have been further from that. It was a dusty little town with a one lane road running through it and not much going on. The hub of the action, as it were, was the Bimini Big Game club, a venue for sports fisherman who visit the island. While it was nice enough, it wasn’t the posh, concrete docked, mega yacht haven I was expecting.

Walking through Bimini was interesting. It was mostly local people going about their business. There kids wondering around after school. People playing cards under a tree. Fisherman cleaning conch. The people we spoke with were chatty and seemed glad that we were visiting.

I think the really magical parts of Bimini are the flats to the east. We barely touched them the day before we left. The shallow banks of the flats have creeks running through them and are teeming with life. Even though the main channel to the east of Bimini is a bit polluted, the flats immediately to the east  have crystal clear water and abound with reef fish, conch and other snails, rays, and starfish. There are lots of critters to watch in ankle depth water.  Exploring that ended up being a fun afternoon for Lisa, Harley, and myself.

The two days we spent here were nowhere near enough. Following are some pictures from Bimini.

7 thoughts on “Impressions of Bimini”