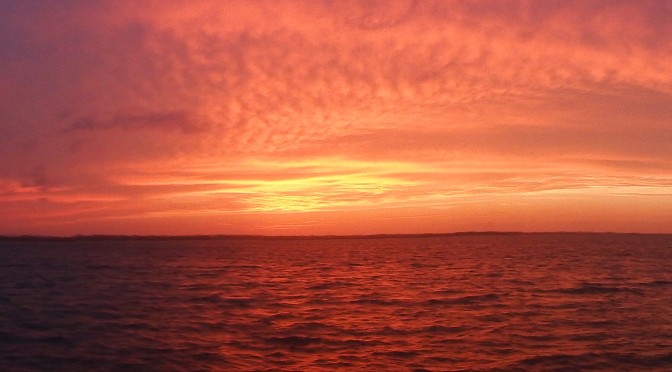 This entry is part 5 of 10 in the series The Abacos, Bahamas

Little Harbor is at the south end of the Sea of Abaco. It’s a cute area “anchored” by Pete’s Pub and the foundry of a famous local sculptor whose name escapes me. The area isn’t that large and is dotted by lots of keys and flats. It’s amazingly pretty. It’s challenging to get good pictures of the area as it’s the entire swathe of what you see that makes it special. We spent three nights around here. Two of which were due to weather. 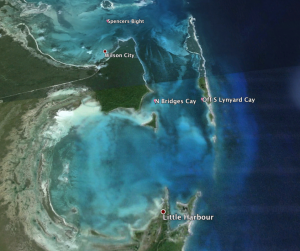 When we got in, we anchored off the north end of Bridges Cay in sand. The chart books show anchorages off Lynyard Cay, but since the wind was out of the west, we opted for the west side of the channel.

Looking around, the scenery was amazing: clear water and lots of sail boats! It also seemed like it was a lot more up market than any of the other places we’d been in the Bahamas so far. This felt more like Tiburon/Belvedere in the Bay Area or Santa Barbara than anything else. There were small islands with large well kept houses.  This was alsothe first time we’d been in the midst of this many sail boats that were actually under sail!

We spent most of our second day poking around trying to get internet connectivity, tidying Pearl, and generally get things settled. That afternoon we decided to move over to the south end of Lynyard Key so that we could take Harley out to swim and play on one of the small crescent moon shaped beaches there. For some reason, we couldn’t get the anchor to set well, and the weather was feeling unsettled so we decided to move north and west to Spencers Bight.

That was one of the best decisions we have ever made. Just about the time we dropped anchor in about ten feet of water, all hell broke loose. We got hit by a squall line. Lisa did the best job of setting the anchor yet and put out most of our one hundred and twenty five feet of chain. It was a good thing too, as we saw gusts hit sixty five knots.

We were fine hunkered down below until the really bad gusts hit us. Pearl bucked like a horse at a hitching rail trying to loose it’s headstall.  Lisa wasn’t so concerned about the pitching, it was the rolling that had her concerned. She’d made the mistake of looking through the port lights in Pearl’s hull and notice they were getting submarined. Seeing fish though the side of your boat is a bit unnerving.

Needless to say, we rode out the storm without a problem. When the weather broke, we decided to bug out to Hopetown and pick up a mooring in the relative security of the harbor. Another front was forecast a day later and we were running low on water and supplies.