This entry is part 9 of 10 in the series The Abacos, Bahamas

I’ve put off writing anything about Hopetown on Elbow Cay in the Abacos. We ended up using it as a base (mostly for the internet connectivity) and spent the most time here of any place in the Abacos. Lisa and I loved being there. The question was “what to write about?!?”

The Hopetown Harbor is cute. That’s the only way to describe it. It’s dominated by the Elbow Cay Light House — a candy striped building from the 1800s that still uses 19th Century technology in the form of a Kerosene powered light that’s driven by counter weights (think grand father clock).

The entrance is a bit intimidating. On our first approach, we weren’t sure that we were headed to the correct place. Our only clue were the channel markers — in what was very shallow water. Pearl had to go in on a high tide.

The Harbor itself  is relatively small (and so crowded) so one’s obliged to pick up a mooring ball. The balls are about $20/day, but get significantly less expensive if you stay a week or longer. The land to which the balls are attached is know as “The Queen’s Bottom,” and are tended by locals who pay a fee for them and rent them out. Yup. The harbor is not a place to swim since there are no convenient pump-out facilities.

“Downtown” Hopetown is small. It has two streets, Front Street and Back Street, and a bunch of lanes that hang off of them. The houses are clap board cottages in much the same style as Old Town Key West.

There are nice Atlantic-side beaches here that are only a hundred yard or so walk from the dinghy dock. The beaches are not crowded and have conveniently accessible reefs to snorkel if you’re so inclined. 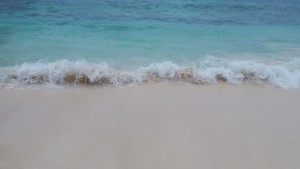 There are a couple of bars and restaurants that are fun. The most convenient of these is Captain Jack’s which has the best potato chips I have had, as well as a pretty darn good blackened fish reuben. There’s also Sip-Sip, a wine bar that’s a lot lower Key, as well as the Edge that competes with Capt. Jacks on alternate nights as the local disco.

Hopetown also is a good opportunity to provision. Stuff here is more expensive than in Marsh Harbor, however, a scant five miles away. After a while we got in the habit of heading over to March Harbor to provision. Initially, we stayed so long in Hopetown that some birds decided to build a nest in the radar reflector.

The people in Hopetown are relaxed, charming, and helpful. We had a great time. We made several friends, participated in wonderful dinners, and had fun learning how and where to fish in the area. Hopetown, however, has sharks. We didn’t fish for them as we did in the Keys.

Here are some pictures from Hopetown and northern Elbow Cay where it’s located.