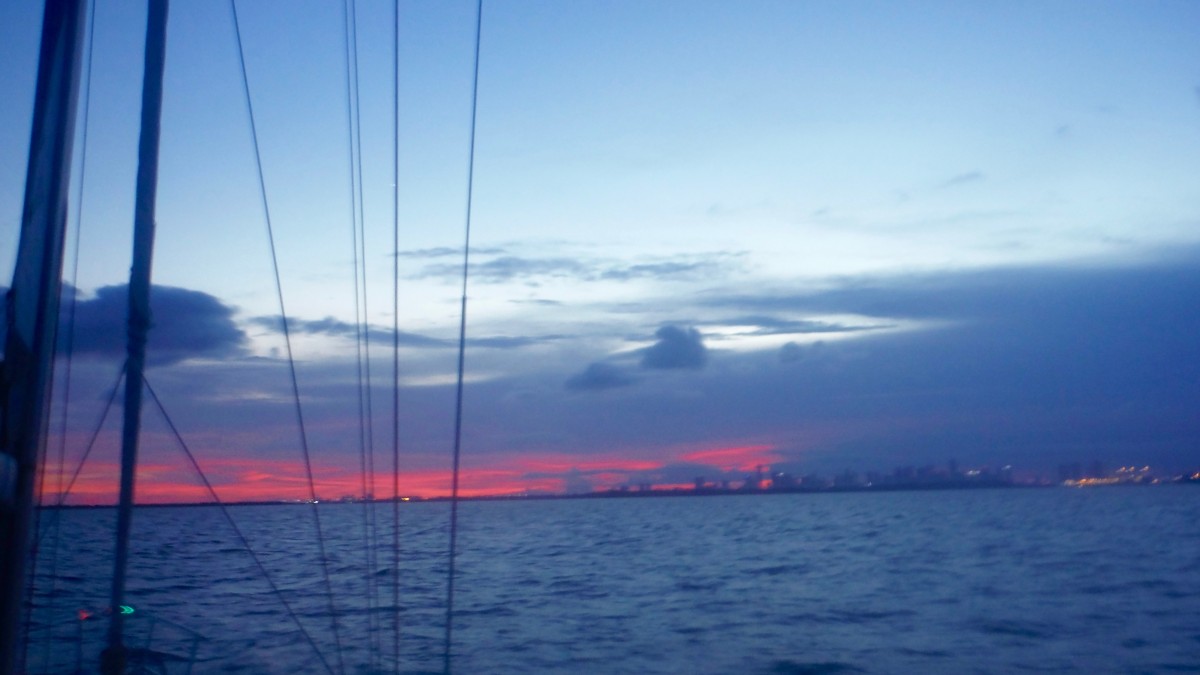 This entry is part 10 of 10 in the series The Abacos, Bahamas

The Abacos have been wonderful for us. We sailed, we motored,  patched, fixed, snorkeled, made close friends, and ate great food. We learned how much fun it was to take our boat out and use her to do what she was meant to do. We had an awesome learning experience. It was hard to say goodbye, but Lisa had a health issue that necessitated us being back in the US. We were sad to leave.

Our route back was less complicated that or route to the Abacos. We went from Little Harbor in the Abacos to Bimini in one hop. We left Little Harbor in the morning, and were in Bimini about 24 hrs later. Just like that. This was Lisa’s first overnight trip. While she was a little apprehensive, it turned out to be a breeze. Getting around “Hole in the Wall” was no sweat. After that we headed for the Bullocks Harbor and kept going.  We kept Pearl in deep water at the edge of the Bahama Bank until sunrise. This kept us out of the shipping lane in the Northwest Channel and worked well for timing ur arrival in Bimini.

After that spending a night in Bimini, we made a late morning departure for Key Largo. The ride over was gentle, a one foot wind chop at best. When started out, the wind was pretty much on our nose. Mid-afternoon, it backed to the south and we got Pearl’s sails up, and kept them up until we were about 10 miles off Miami.

En route we were checked out by a couple of aircraft — a black unmarked helicopter and a coast guard aerial patrol. Nobody bothered us.

Instead of heading into Miami, we opted to continue down the coast towards Key Largo. We’d heard that checking-in in Miami was a nightmare, so we decided to keep going and check-in in the keys. We broad reached down the Miami water front just at around sunset. It was beautiful. Usually the entire area is littered with lobster traps, but since the season hadn’t kicked off yet, we felt pretty safe in motoring or sailing.

Since we Lisa and I had registered with the Local Boater Program (a part of the Homeland Security Small Vessel Reporting System, all we needed to do to check in was call the number on our cards and report in. The officer who checked us in could not have been more polite. His advice was “file a float plan” the next time as that would make the process even easier.

Pearl is back in the US, on the hard in Marathon. We have recovered her from our trip and packed her up to be stored on land for a while. Harley is depressed. This isn’t much fun for him.

Our next adventure is to head back to Portland, OR to work on my house there for about three months as well as a couple of other projects we have in the pipeline. We weren’t ready to leave the Abacos, but life intervened.

I am not sure what I will miss most, the people we’ve met, the clarity of the water, the easy pace of life, or what. I didn’t expect to like the Abacos as much as I did. Perhaps we’ll be back. Sometime.