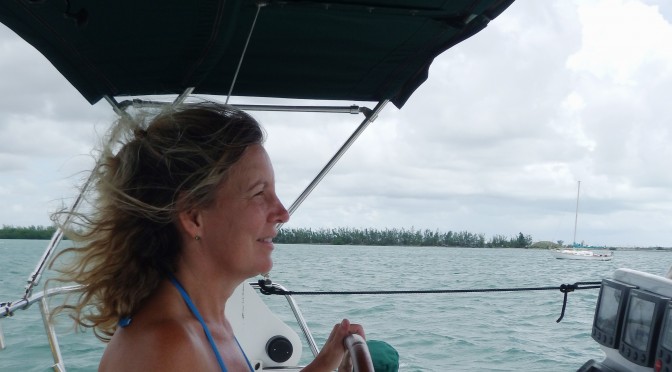 We are finally done with boat projects and upgrades to Pearl to make our cruising life more comfortable. After all the theorizing, what we actually have done follows:

Lisa and I decided that davits were a “must have.” There are several reasons for this:

(a) Improved boat performance: you don’t end up dragging the dink, allowing the boat to move a knot or so faster.

(b) Safety: you have an easily deployed life raft if necessary. Yes, we have a seperate life raft, but ….

(c) Security: dinghies are better stored “on board” than in the water; needing to climb aboard a boat to cut a dinghy free tends to deter prospective thieves.

The davits we finally settled on are from Garhauer Marine. They are very well made, and I highly recommend them.

Sadly, Ziply Banana Rocket, the Yellow AMI XL 300 PVC dinghy we purchased last year started to fail. This was due to the glue that holds the boat together being eroded by the heat and UV in Florida. Given that a dinghy is a critical piece if equipment when cruising, we opted to purchase an AB RIB (Rigid hull Inflatable Boat).

The big deal with hypalon vs. PVC fabric in the tropics isn’t about the fabric itself. It has to do with the glue that holds the fabric together. According to a inflatable boat wright (?) I chatted with, PVC glue start to fail at about 80 F. Since one is consistently above that temp in the tropics,  PVC boats tend to fail sooner rather than later as we saw with the AMI.

Given that the Raymarine Pathfinder Radar had started to glitch and that charts for the chart plotter were pretty expensive, we decided to upgrade all of the navigation electronics and radar, and add in AIS display capability. Oddly enough this was less expensive than buying the electronic chart kits for where we wanted to go cruising. The net result is improved visibility of surrounding traffic as well as less expensive charts!

Given that we haven’t added a high capacity generator to Pearl, we figured we’d go with a low tech solution: a deck shade that keeps the sun off the fore deck. Surprisingly, the shade noticably drops the temp in the V berth. Also, the shade is well enough constructed and laced on that we leave it up during storms — for which it can also serve as a rain catcher if required. The shade was definitely worth the $ 380 it cost to get made.

5. Filters on the fuel systems

We’ve added a Racor 500 filter on Pearl. This replaced the Racor 230 (?) that came standard. Additionally we’ve opted to add a couple of fuel shutoff vales to this to facilitate filter replacement rather than running a dual filter system. While I gather you can use vise grips on the fuel lines when changing filters instead of having shut off valves, that seemed a bit dodgy to me.

We’ve also added a Racor 120 gasoline filter for the outboard that will hopefully minimize problems there.

6. “Eye Lids” for the Portlights

Keeping the port light open when it rained was a bit of an issue. It made the boat stuffy and uninhabitable. We’ve added “eyelids” for the port lights which mostly keep the rain out of the boat. These cost appromimately $50 each from Portshade.com and were super easy to install. This was another worthwhile investment as it keeps the boat ventilated.

We upgraded the original I-Com to a Standard Horizon Matrix AIS+. There are a couple of cool features to this change. The first is that it has Digital Selective Calling, which enables you to call a specific vessel based on their MMSI number (which most commercial vessels advertise via AIS). The second is that it integrates with the Raymarine e7D and a67 chart plotter/MFDs to provide enable AIS displays on the chart plotter. So, now we can identify the vessel we need to call and reach them directly.

It would be slick to be able to be able to tap the AIS icon on the chart plotter to have a call placed, but that seems way over the top at the moment.

Pearl came equiped with an approximately 200 gph bilge pump. I hadn’t really thought about what that really meant until I sat down and figured out  how much water we’d take on if one of the sea cocks or through hulls failed. That calculation resulted us adding a 2000 gph bilge pump that is plumbed into the boat as well as a 4000 gph portable bilge pump. A couple of things to note are that what bilge pumps are rated for and how much they actually put out depend on the input battery voltage, how far the water’s being lifted, and I believe, how many plastic buckets one has.

Pearl originally had 200 Ah house battery bank, We’ve upped this to 520 Ah, and changed from flooded batteries to maintenance free AGMs. We figured that AGMs are better for a a few reasons: the first is that they don’t require maintenace, the second is that they are more resistant to being bounced around. The third is that they can be drawn down without damaging the cells.

9. Electric Pump on the Head

Ok. The head in this case is the toilet. We decided to replace the Jabsco hand pump with en electric macerator pump to clear the toilet bowl as we seemed to have interminable problems with the joker valves on the manual pump. This is a nasty mess on which you don’t need the details. The short version is that we a quite happy with the result.

There are several other little tweaks we’ve made — e.g. adding a plexiglass splash guard to the galley sink, a clothes line in the head, etc. The upgrades listed above are our best guess at our most important improvements for cruising.

We’d love to hear from you if you have suggestions based on you experiences!

2 thoughts on “Our 9 Best Upgrades to Pearl for Cruising”