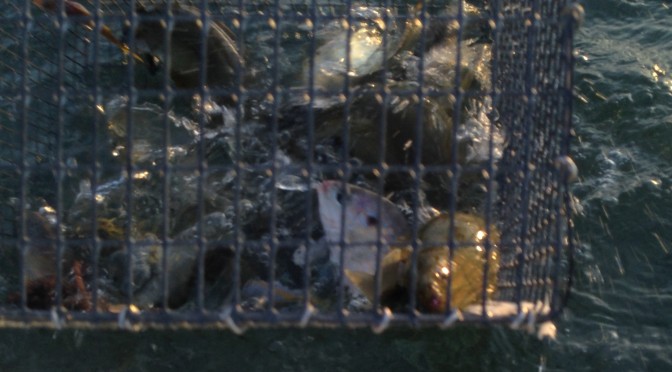 For those of you who missed intermediate episodes, Lisa and I DID NOT off to the Bahamas as advertised. We had problems with our refrigeration system that eventually took about six weeks to resolve. Besides, we really weren’t interested in wandering too far from “home” during hurricane season.

Since we weren’t off exploring foreign lands, Lisa and I decided to explore where we are more thoroughly. By and by this evolved into getting more serious about catching fish — rather than fishing which is one of my more favored pass times.

As luck would have it, a friend of ours at the Marina who is a charter boat captain and an experienced fishing guide took us his wing and is teaching us how to hunt (and catch) the different species of fish around the keys — which gets me to to the point of this story.

By the way, the Florida Keys and Key West (in particular) are one of the most varied and productive fishing grounds on the planet. There are a variety of environments raging from deep sea (1000+ ft) fishing for Marlin and Sail Fish to bottom fishing for giant (500+ lb) grouper and sharks, to flats (very shallow) fishing for Tarpon, Bone Fish, and Permit. All of this is available within about 10 miles of Key West.

In order to CATCH fish here, however, it helps to have live bait. Yeah, I have learned to throw a cast net, but there are easier ways to catch bait fish — namely use a fish trap. So … our friend Capt. Bill generously loaned us a fish trap that he wasn’t using as well as a pen to hold the fish we trapped. We were ecstatic!

Lisa and I duly loaded the trap with chum (a disgusting fish-oliy goo) that attracts fish and laid it out on a nice patch of sand for our prospective. The first time we did this, we got a nice haul of bait fish, and had a great day hooking (but not landing) tarpon on light  spinning tackle.

The following day when we checked our trap,  it contained a whole bunch of the little gray faces of the grunts and snappers we were becoming accustomed. It also had a mean, green, rather annoyed looking … eel. Besides our bait fish, we had managed to catch a four foot green moray eel. You can see his face at the bottom left corner of the picture above.

Fortunately we spotted the eel before we up-ended the trap into out bait bucket on the dinghy. If we had, the very-irritated-by-this-point moray would have got loose in the dinghy which would not have been fun, to say the least. Discretion being the better part of valor, we decided to open the trap, let bait fish escape, and the eel depart without further ado. Even though they aren’t venomous, tangling with a 4 ft angry eel wasn’t either Lisa or my idea of fun.

Fun would be catching a 50 lb Tarpon or Tuna on 10 – 20 lb test. Stay tuned for more fishing adventures.