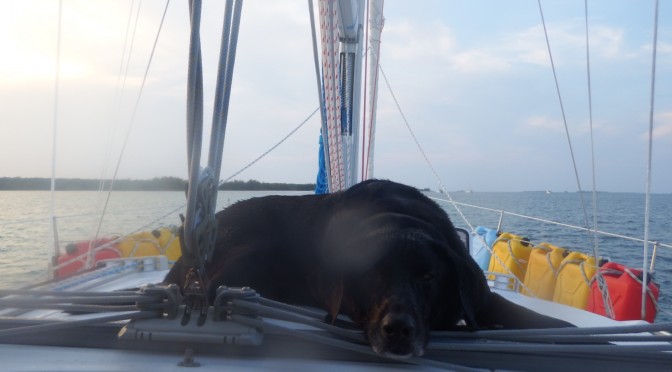 This entry is part 4 of 10 in the series The Abacos, Bahamas

Getting from Sandy Point around the Hole in the Wall at the bottom of the Abacos and into the Sea of Abaco was the second longest ride we had made so far. It took us from Sandy Point down the Providence Channel and out into the Atlantic. This was another instance of make sure you have your weather right. Winds from the North and West could potentially set up sketchy conditions off Hole In The Wall where the North East Providence Channel, North West Providence Channel and the Atlantic all meet in areas with very steep drop offs.

The second day we were at Sandy Point, was a mess. We had stronger than forecast winds from the West. Pearl was exceedingly bouncy and uncomfortable at anchor. Conditions were so poor that I ended up in the water while trying to dock the dinghy back at Pearl. Lisa was not amused.

Fortunately for us, the winds dropped and backed to the South West. I figured this was good enough to get around Hole in the Wall. We couldn’t really spend any more time where we were at Sandy Point and there was a cold front predicted in a couple of days which would have made things even worse. Off we went.

The transit down the North West Providence Channel was the least comfortable to date. We had quartering winds and short following seas that had Pearl wallowing as we motor sailed down. We didn’t fish any, really. It was too uncomfortable for that.

Getting around Hole in the Wall we stayed in deep water about 2 miles off the shore line. The seas were a bit confused as I think we were picking up reflections from the wind chop mixed in with the current. After we got around the corner, the seas settled and we had a nice ride up into Little Harbor.

Getting in through the Little Harbor Cut was no problem. We had good light and were able to easily slip into the Sea of Abaco. This was completely different to any place we’d been so far. There were sailboats, under sail even, all over the place. It had been a pretty long day for us. Since most of the preferred anchorages were occupied or unusable, we anchored in about ten feet of sand off Bridges Cay and took Harley into the shallows to do his daily doody and to play.

We were in the Sea of Abaco!