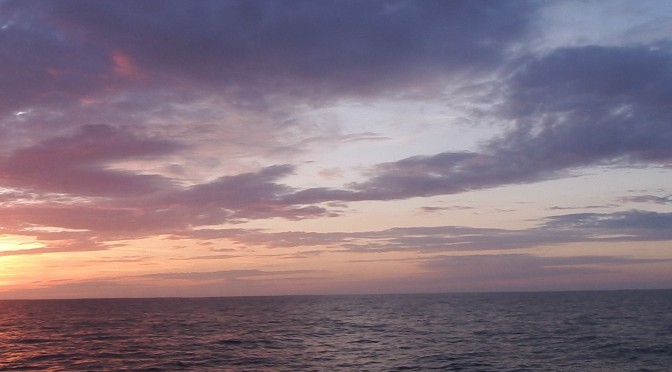 This entry is part 1 of 10 in the series The Abacos, Bahamas

Having parked in Bimini for a couple of days, we took the next weather window to head for the the north eastern Abacos. This area’s reputed to be a cruising heaven, so guess what, we had to check it out. The area has great services, it’s easy to get boat parts, and maintenance work done, so it seemed like a great venue to do a shakedown (read breakdown) cruise to figure out what would work.

There are a couple of ways of getting to the Abacos from Bimini. One involves going north from Bimini to Freeport and then around the top to West End. Otherwise, getting pretty much anywhere from Bimini involves spending a night out on the Bahama bank and heading through the Berry Islands. Since we hadn’t heard anything good about Freeport and in order to keep our travels to day light  hours,  we opted to spend a night out on the bank and go through Bullocks Harbor in the Berrys.

I was a bit paranoid about spending a night out on the banks. You’re anchoring tens of miles from the closest land in any direction. It isn’t that I have a problem with being out of sight of land, it’s a question of anchoring and encountering weather.

We picked what I thought was a great weather window. The predicted winds and swells were negligible. About a third of our way to our stop for the night at Mackey Shoals, we ran into a storm cell. We figured it would blow over, but instead it stayed with us until we got to Mackey Shoals. It quit just before we anchored for the night and gave us a spectacular sunset.

The next day, we were off to Bullocks Harbor.